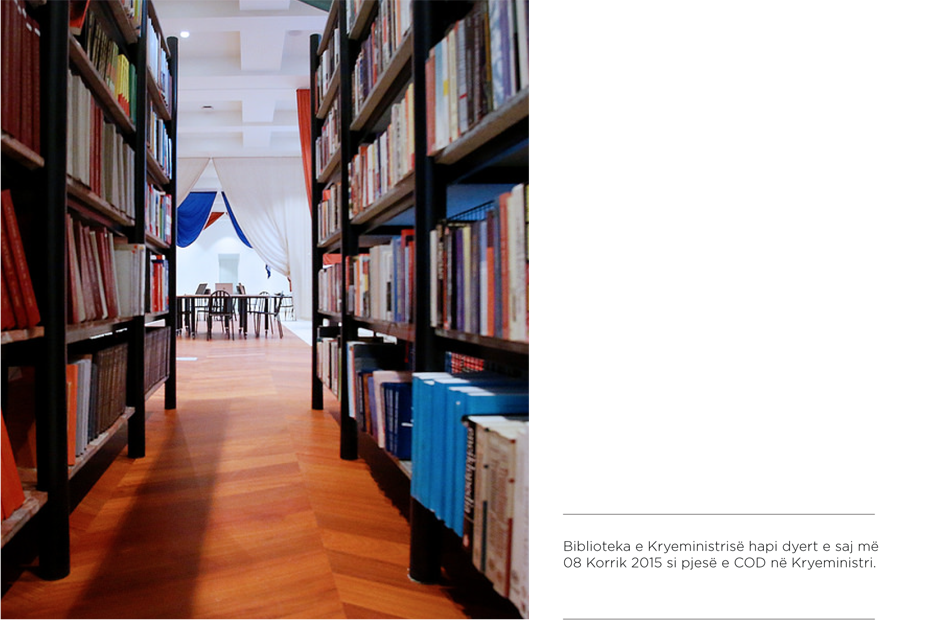 The library of Prime Minister’s Office

The Prime Minister’s Office Library opened its doors on the 8th of July 2015 as part of the Center for Openness and Dialogue.

The library aims to provide to the public an open and modern space where collections of various themes can be found, mainly international relations, EU, political science, history, architecture, art, urbanization, etc. It is part of the online system COBISS (a joint system for bibliographic online services), which provides access to 90 thousand titles and is the reference model for the platform of national library systems of information.

The library is also enriched with special collections donated by various embassies, such as American, Italian, German, French, Austrian, Turkish, Serbian and Polish, Swedish, Chinese etc. Mainly, there are publications showing the history and culture of the relevant countries, but also the international, political, social and cultural relations in our country and beyond.

The library also offers special editions digitized by the National Library, collections mainly with themes of the Albanian state, laws, decrees, territorial division and others since 1912 to 1939.

In order for you to have access of the digitized books you have to visit us at COD’s library.

On 10/17/2015 at the Library of COD was promoted the book “Edhe një Shqip” of the author Rudina Xhunga. The book was a summary of socio-political television program inviting the most prominent personalities of politics, literature, philosophy and contemporary art in the world. “Shqip” approached to a nationwide audience with the motto: One nation, three capitals, 10 million Albanians. In this event were donated around 100 copies to the guests and the COD library, books made possible by the EUT.

On 06/11/2015 at the Center for Openness and Dialog (COD) was presented the new book of Alastair Campbell, “Winners”, translated in English after a sensational success in Great Britain and the recent publication in the United States. A book on the road to success through examples of success stories from elite athletes to senior managers, from leaders of the countries to those of the global business companies. A rare discussion on the team, leadership, strategy, talent, victory, loss and so on, thanks to the author’s presence and the special guests, the man with the Milan of trophies, wrote one of the golden pages in the history of football, Arrigo Sacchi and the coach of the Albanian National Team, Gianni De Biasi. In this event were donated about 100 copies for the guests and the COD Library, books made possible by the Open Society Foundation for Albania (OSFA).

On 11.12.2015 in the premises of COD at the Prime Minister’s Office was presented the unique book of Fred Abrahams “Shqipëria e Re”- From dictatorship to democracy in Europe”.  The book of Abrahams, American journalist and eyewitness of the period of change in Albania, is written during the period of 25 years based on experiences, archival documents in the US and Albania, countless interviews and analysis, creating a view that comes for the first time as a professional and impartial reflection of the Albanian transition. In this event were donated about 100 copies for the guests and the COD Library, books made possible by the Open Society Foundation for Albania (OSFA).

On 1/12/2015, a worthy gift was added to the Library of COD by the Director of the Albanian Language Editorial of the Chinese Foreign Radio. A quantity of books that enriched even more this center as an open place for dialogue and art.

The Swedish Ambassador to Albania Mr. Patric Svensson on 28/08/2015 donated to the COD Library a stock of books in accordance with its collections. During the meeting with the director of the library, Mrs. Dorotea Kerni, he expressed the readiness of the Embassy for further cooperation with COD.

On 29/01/2016 at the Library of COD was arranged the ceremony of books donation from the Embassy of the Russian Federation. The Ambassador Alexander Karpushin gave to this center about 100 books, enriching the special collections, mainly with encyclopaedic and historical books.

Open Society Foundation for Albania (OSFA) enabled the purchase of 250 books, a fund which further enriched the main collections of the Library.

A series of publications were donated by Shell Upstream Albania B. V. for COD’s Library. These publications are quite specific in use at Center for Openness and Dialog.